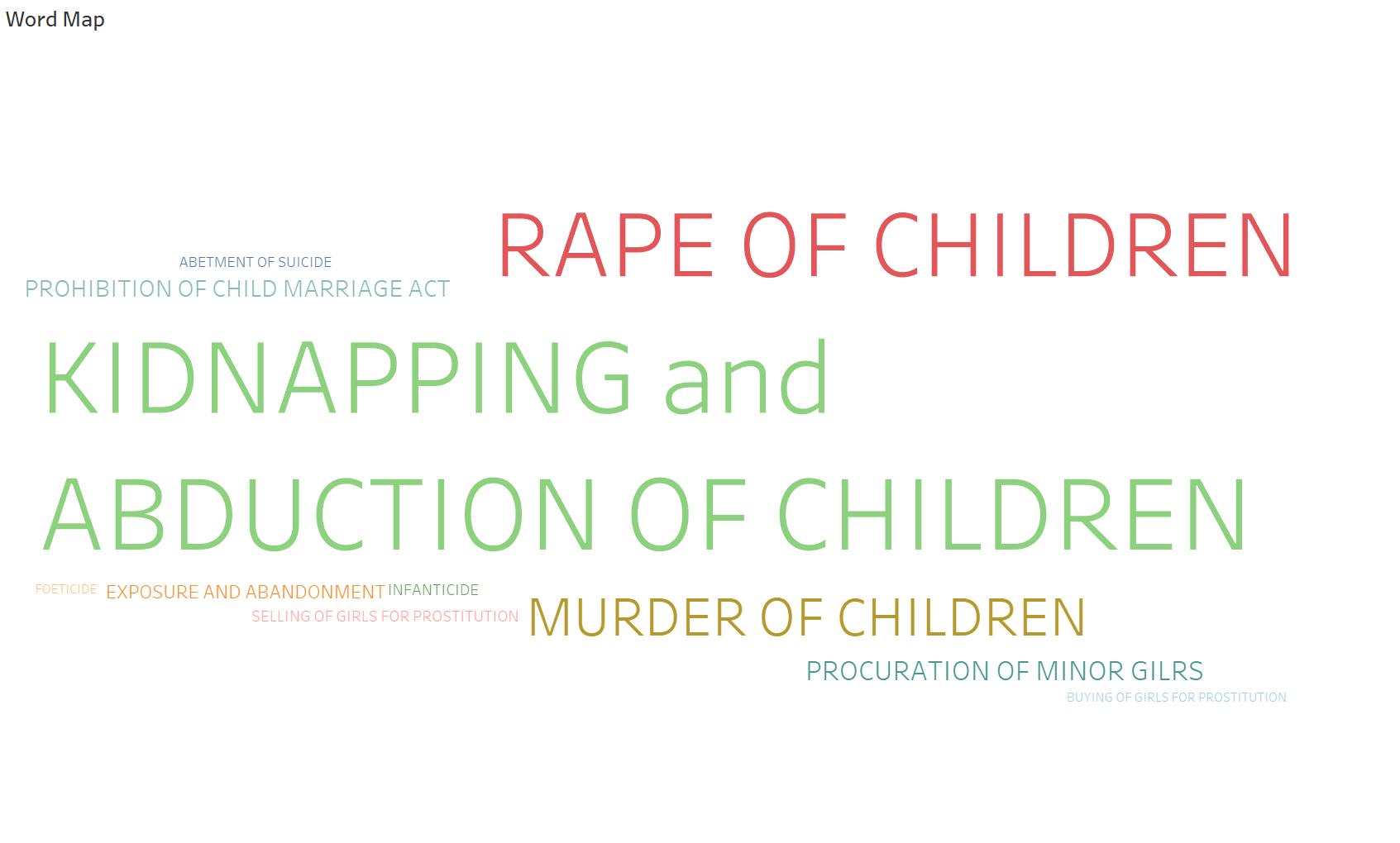 Data Insight Of Crime Against Children with Tableau 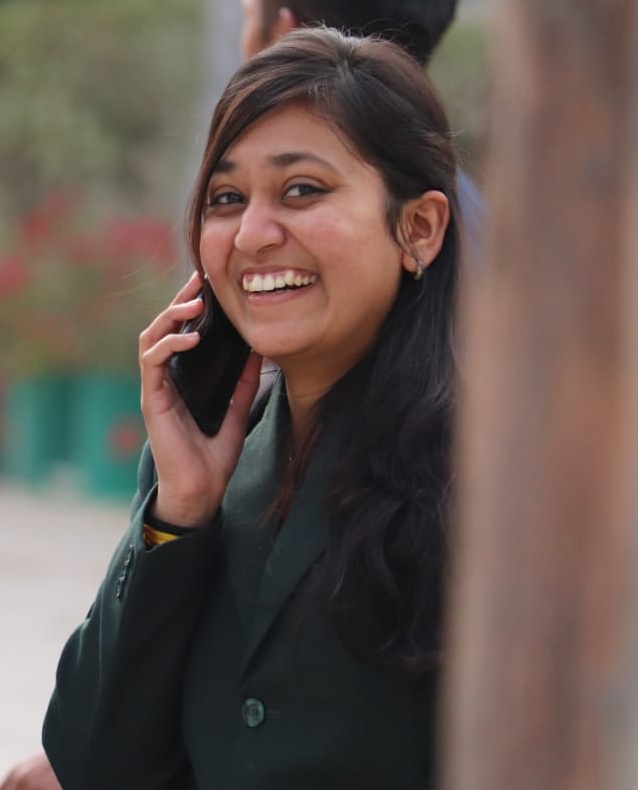 It is said that “One can depict the whole story in a single picture, which is as informative as descriptive words and sometimes much more expressive.” The aim behind this article is to get a overall view and knowledge about the crimes that are imposed or enacted against children by categorizing the overall crime rate into different categorical areas so as to get concise and precise knowledge.For this article we have taken real time data of crime that were enacted against children from the year 2001 to 2012. Visualizing data through graphs will make it much easier to view data.

Working with the Data

In the journey of visualizing data, the data goes through various stages. Firstly the data is gathered from various sources, then it is cleaned and sorted in the required manner as the raw data may contain some unwanted values. After making the data ready with the help of different combinations of dimensions and measures the graphs are plotted. Also some calculated fields are made by applying some operations on the two or more measures which will be helpful in plotting of graphs.

The different graphs depicted with the help this data are:-

1. Total crime in each state 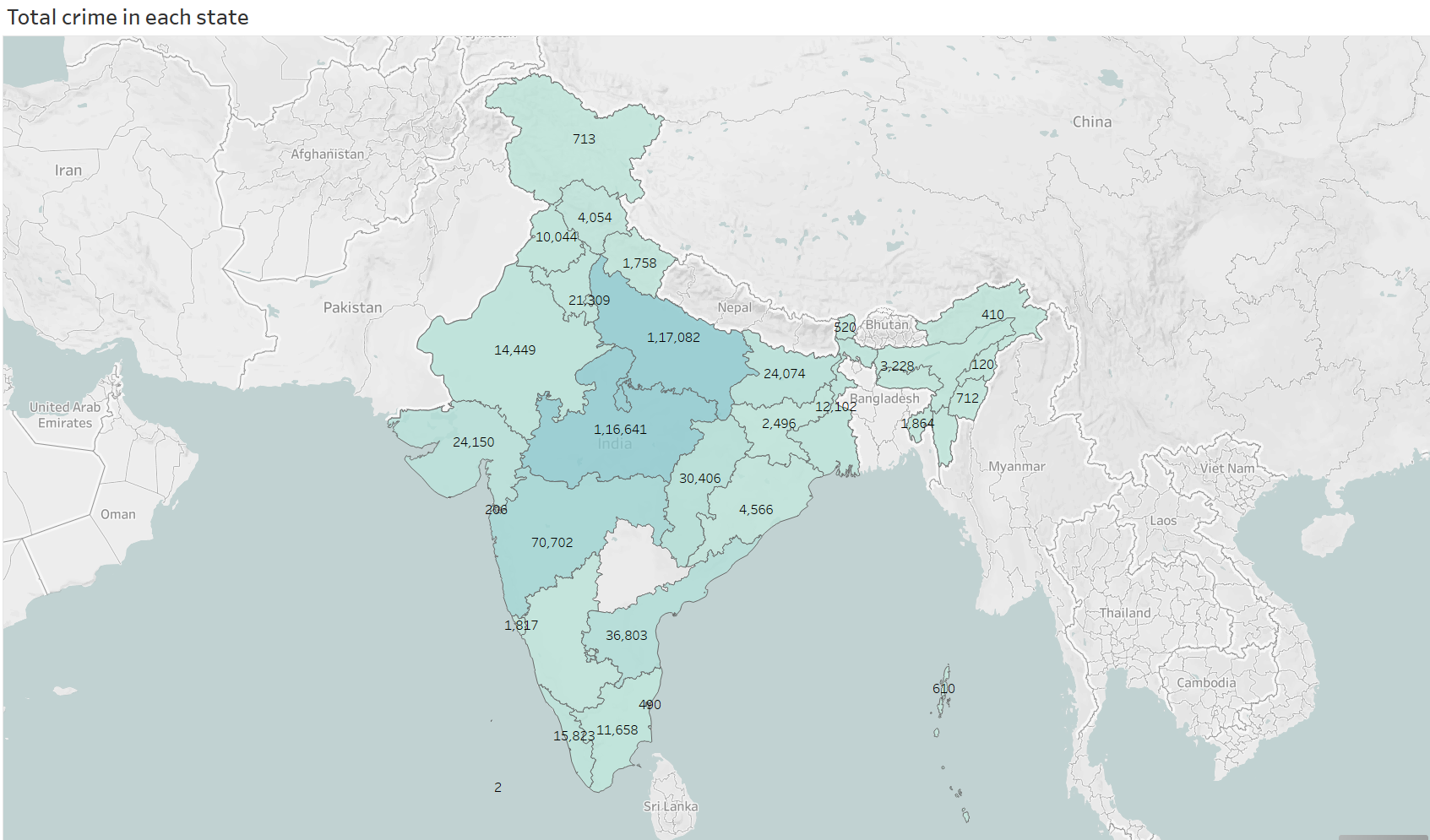 2. Total percent of crime in each state 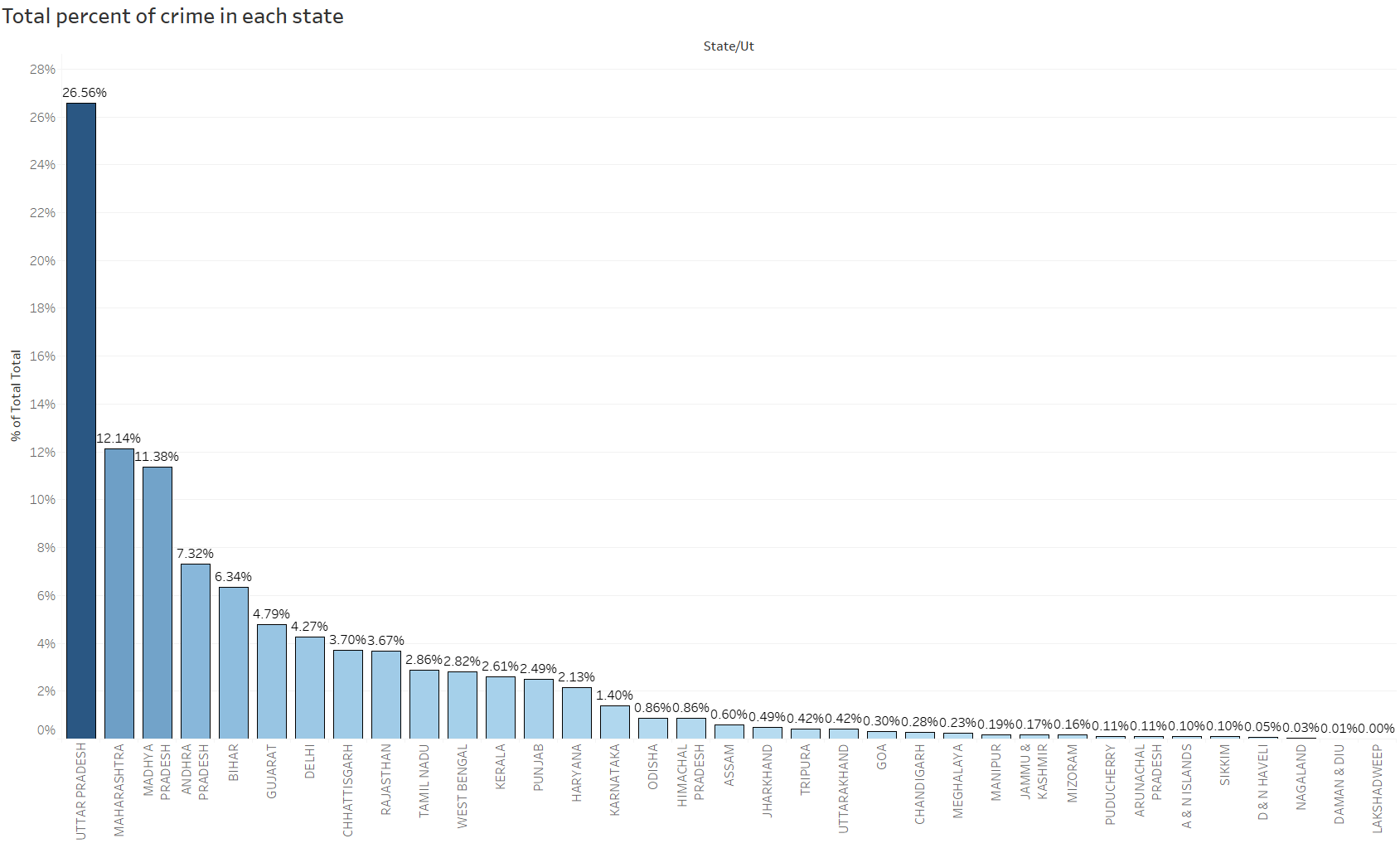 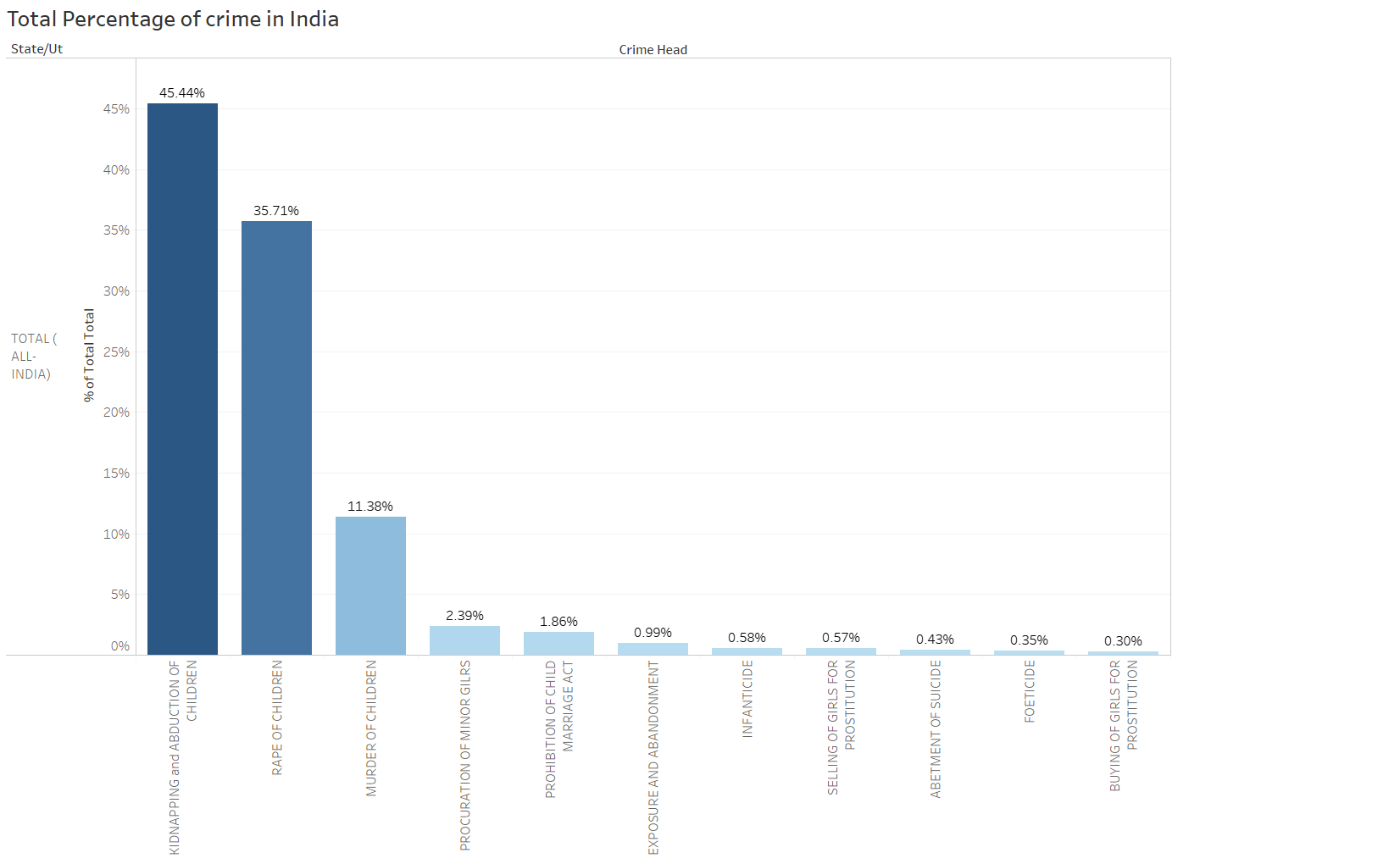 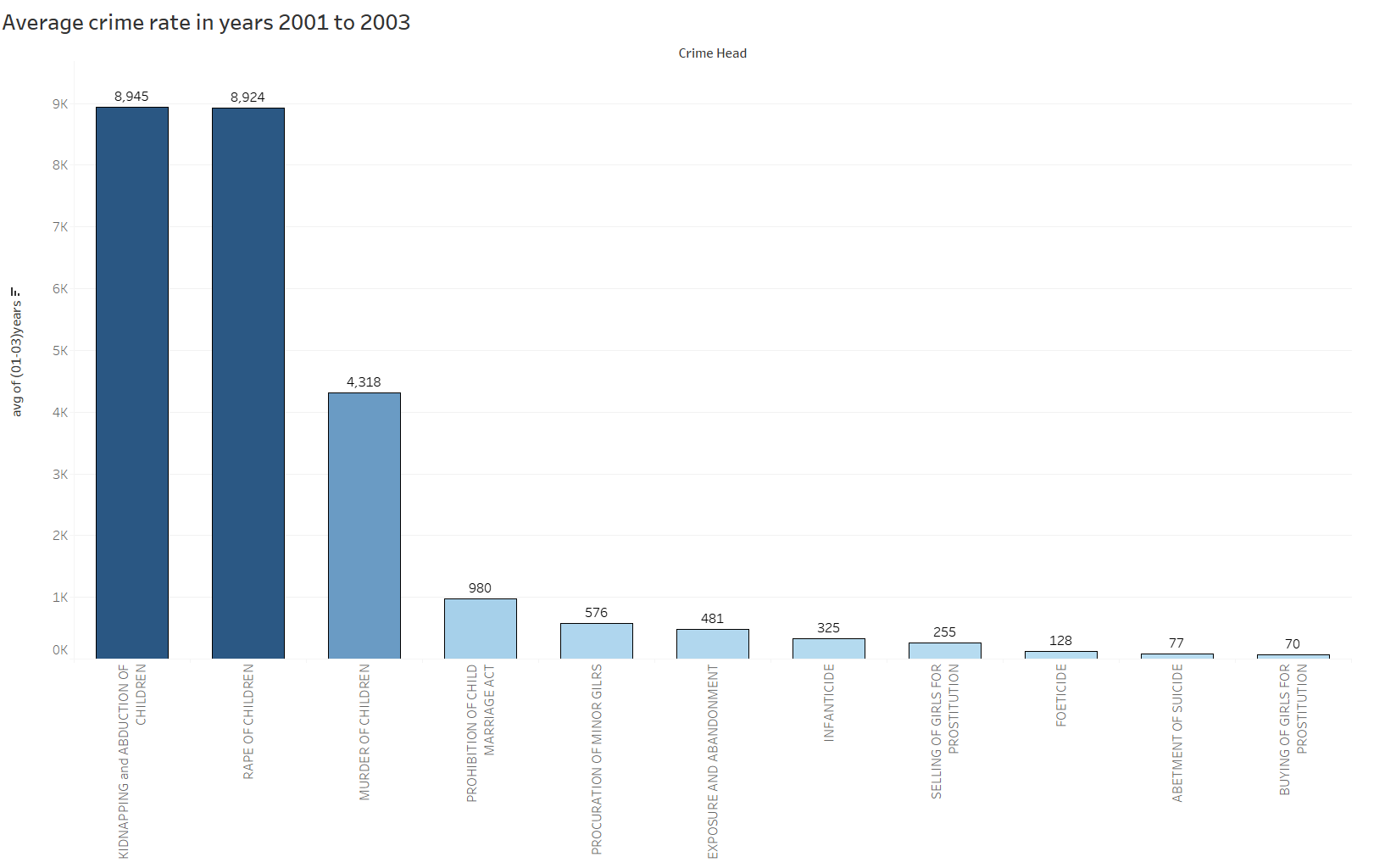 From the previous graphs we got the knowledge about the different sections of crimes done against children in the years from 2001 to 2012. To get more deeper insight we just divided 12 years into 4 trimisters. The above graph depicts the crimes that happened against children in the years from 2001 to 2003.In these three years the children were kidnapped in high rate which is depicted with drker shade of color. 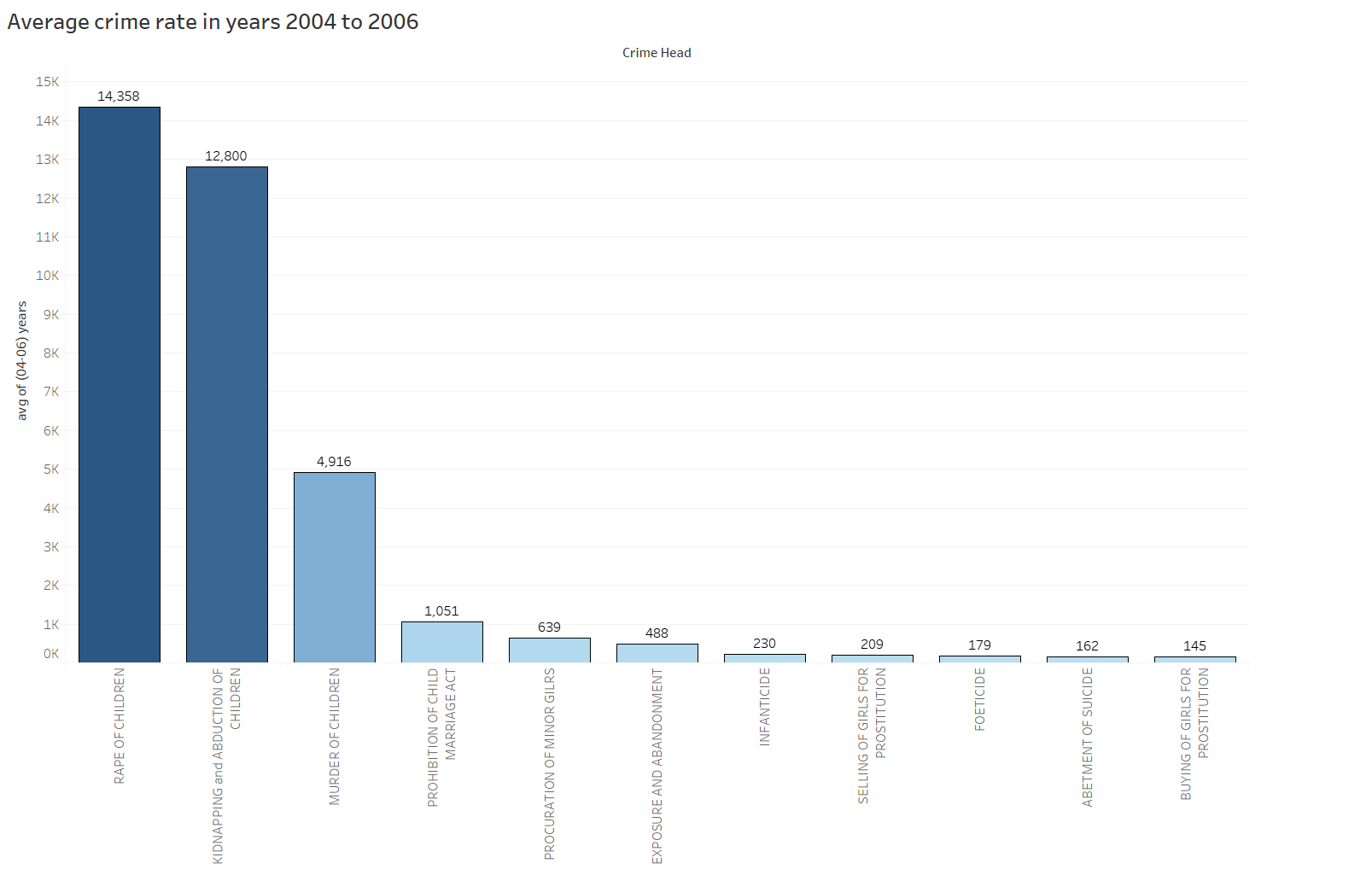 After getting the idea about the crime rate in the first trimester(2001-2003) now let’s get into the insights of second trimester that is from year 2004 to 2006. In this trimister it is being picturized clearly that the crime associated with rape of children has been recorded in higher rate. In this trimister kidnapping is also the second most recorded crime but the crime rate has been increased from the first trimister.The increase in crime rate of particular crime gives the clear idea that the effective measures should be applied to get over the increasing rate. 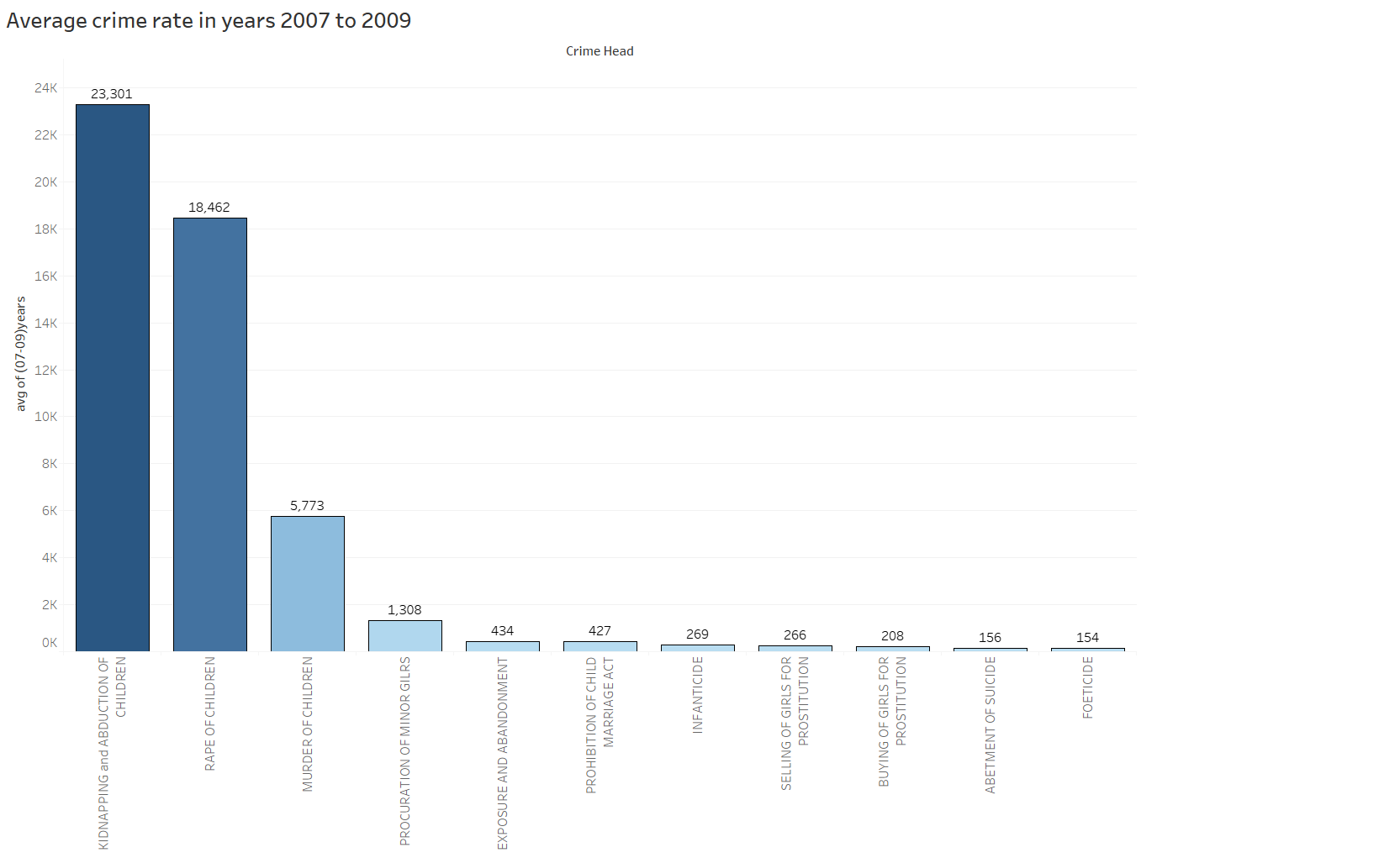 After getting the deep insights about the first two trimesters about the crime imposed against children.Now let’s move forward and get the insights of the third trimester that is from year 2007 to 2009. Through the above graph we get the clear idea that the crime rate of kidnapping of children is again recorded the highest crime enacted in this trimester.Apart from kidnapping the rate of all the crime sections are increasing as the years are increasing, which is one of the main areas of concern where steps should be taken to decrease the rate or eradicate completely. 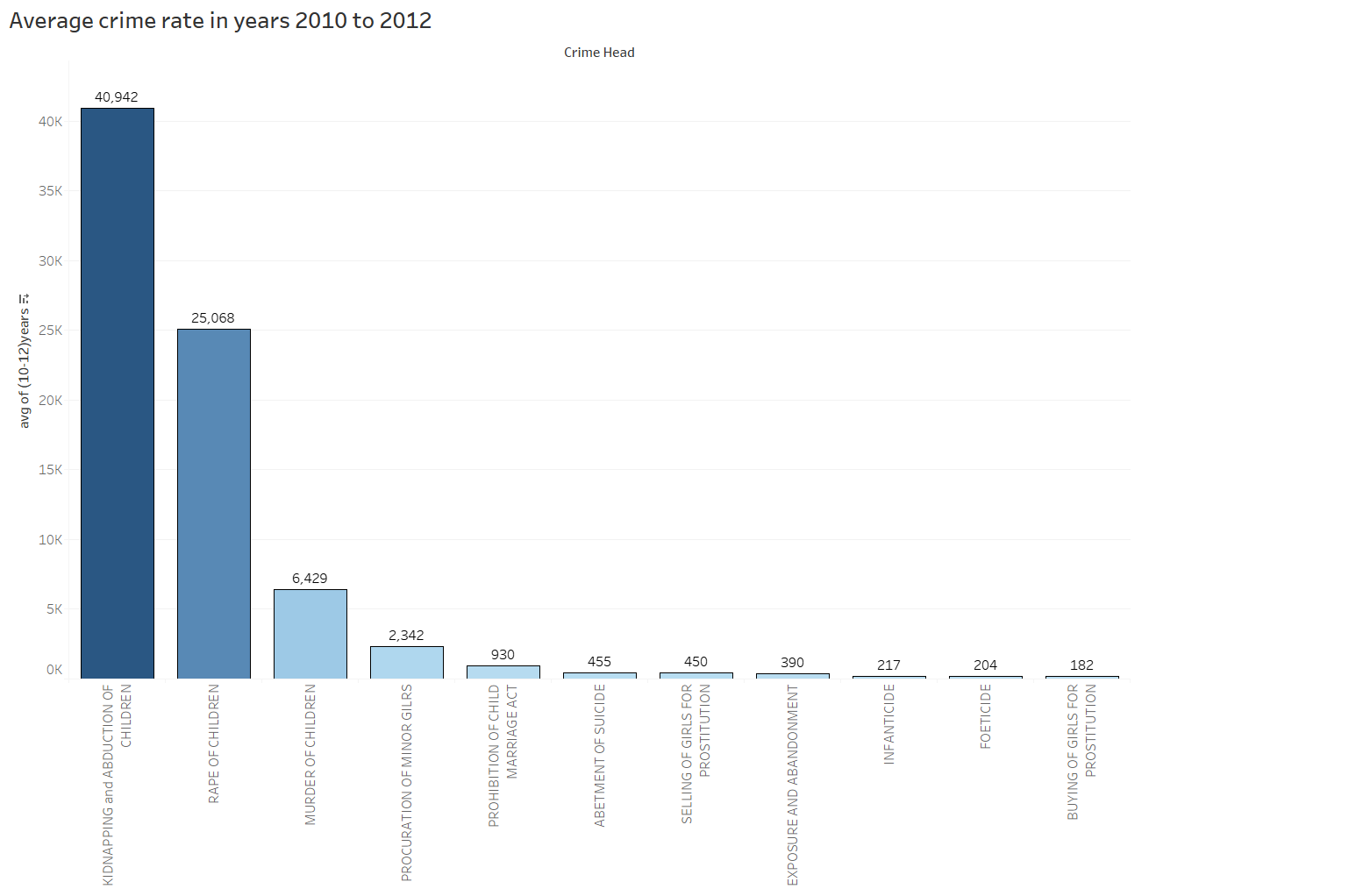 The fourth trimester that is from year 2009 to 2012 gives the knowledge that kidnapping of children has the higher crime rate and rape of children is the second most crime enacted in this trimester. But also the other crime heads are also increasing year by year. Again it gives a clear idea that the crime rate of each crime head is increasing in every trimester. This increasing rate should be taken under the deep knowledge to decreasing them and eventually eradicate it.

At last after analysing the data of crime enacted against children from almost every angle it picturizes very clearly that the crime rate of each individual crime area is just going on increasing every year. So, as a responsible citizen of our nation its our duty to spread awareness among people to lower down the crime rate by taking different measures like literating children.